Patras is one of the most beautiful cities in Greece. It is the third biggest city in the country, famous for its University and large academic community. It’s also famous for its international port which connects Greece with Italy and consequently with Western Europe. It is precisely this feature that has attracted thousands of people looking for the opportunity to continue their journey to Europe through the ferry connection with Italy. The first few thousand refugees that arrived there had fled Iraq in 1996. Since 2001, as a result of the wars in Afghanistan and Iraq, hundreds of thousands of refugees have tried to reach Europe via the port of Patras. Along with them, many Somalians fleeing their country’s long civil war. Many of them stayed in Patras for months, waiting for the opportunity to get in or under a truck destined to Italy, risking their lives in a game of hide and seek with the drivers and port authorities.

The first time I visited Patras for work was in 2008. The makeshift camp was at the time home to thousands of people including hundreds of unaccompanied minor refugees with no access to basic daily essentials. Médecins Sans Frontières used to offer them medical care while solidarity groups helped with food and basic necessities. In January 2009, the camp was destroyed when a forceful police eviction of the residents was followed by a fire destroying their makeshift lodgings. Of course, that didn’t stop people looking for the European dream from continuing to flock to the city. In recent years, with the closing of European land borders following the 2015-2016 refugee flows, Patras has once again become one of the few possible exits to Western Europe. Children and adults had turned two abandoned factories into short-term residences, waiting for a chance to realise the dream.

In March 2018, as part of the ChildMove project, I found myself in Patras, and more specifically at the Day Center of the NGO PRAKSIS, to assess it as a possible site to conduct my research. This space provided shelter to hundreds of people daily, fulfilling needs such as food and psychosocial support, but also a meeting place where they were treated simply as human beings. One of their services, realised with the support of the Belgian organization “Mobile school”, was to create an actual school on wheels, which the social workers and teachers of PRAKSIS used to approach the children who, living on the street, did not have access to education.

During my visit, their van was at the garage. This did not stop them from keeping their appointment with the children by visiting them in one of the occupied factories. Arriving at the day centre, I found them loading their private cars with balls, traffic cones, and water bottles. “Would you like to join us?” they asked. They didn’t have to ask me twice. I squeezed myself in a car with them, all young people with University diplomas and a passion to do their job in the best possible way. At first glance, the factory looked literally abandoned. Looking at it, you couldn’t imagine people staying there. The day was very hot – even for Greek standards – and in a place made of concrete, the heat intensified further. We left the cars in an empty factory yard and, after collecting our stuff, we went to meet the building’s “residents”. 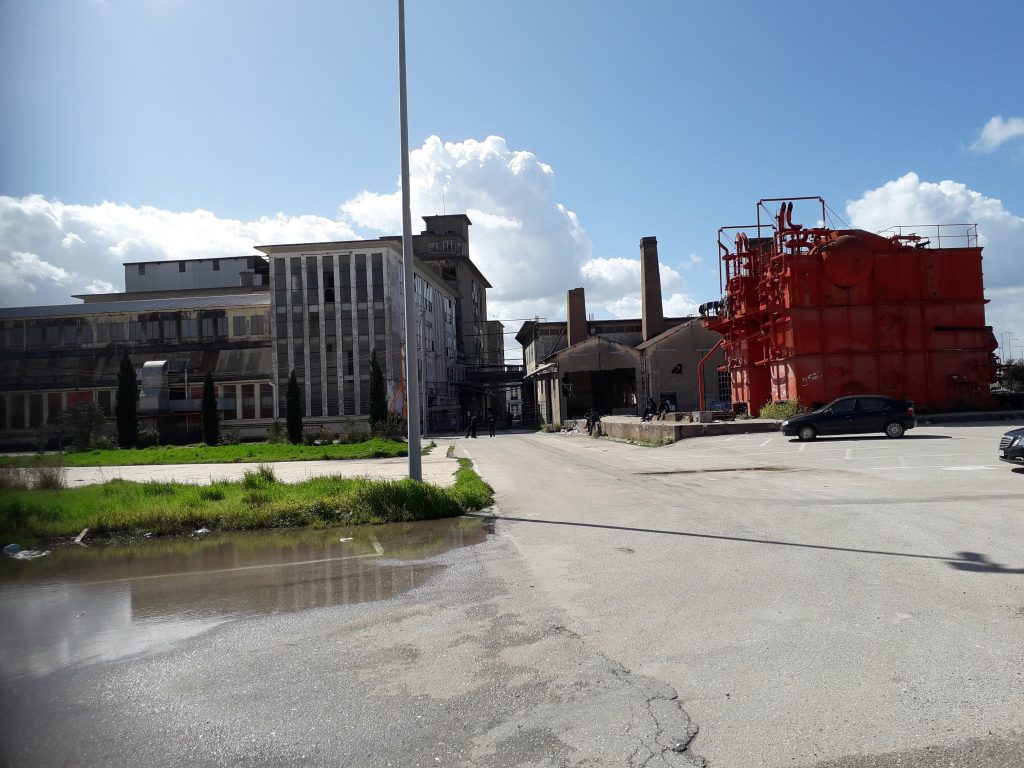 As we approached, many people started coming out of various parts of the factory. Some already knew our colleagues and marched directly to meet us, while others stayed away watching cautiously. We ended up in a large open space with a concrete floor, possibly a former parking lot. The coordinator of the team started to explain to the children who approached us – mostly teenagers aged 16-17, but also some younger children or young adults – that the mobile school was damaged, so if they wanted instead of a lesson we could play football. The response was immediate. Within minutes, two teams were formed, leaving some colleagues out because of the many volunteers. The cones were set up to serve as goalposts, and the game started. As it went on, the number of spectators multiplied. Gradually they began to participate with prompts and shouts in their language, in English or in broken Greek depending to whom they were addressing. Having played sports for many years, I knew the importance of socializing through team sports. But at that moment it was something bigger than that. It was proof that we are all the same, we strive for the same purpose and we all work together to achieve it. The game lasted for about an hour, no small feat considering the weather conditions and temperature of almost 30oC. I had the feeling that no one wanted to stop but heat and fatigue overcame us. We all sat down together to drink water and comment on the game with input from the spectators. Young people playing ball, what could be more normal than that?

I got into a conversation with some of the teenagers. They had been living in the factory for months, intend on finding passage to Italy. “We know the timetable, so we go to the port when the ship is supposed to sail. You may get lucky and leave the same day, but most of us have tried at least 5 times. This child managed to go to Italy, but there he was caught by the Italian port authorities and sent back,” explained M. from Afghanistan, who spoke very good English and acted as an informal interpreter. I explained my work to him and told him that I intended to return in May with my interpreters to get interviews from the children at the factories. He was 17 years old but looks younger. He had been living there for 8 months. He came to Greece 2 years ago, at the beginning of 2016, shortly before the land borders closed. He wanted to travel to Germany where his brother lived with his family. He once tried to leave via the Balkan route but he was stopped at the Serbian border and sent back. He talked about the violence of the Serbian police but also about the port authorities in Patras. “When you go back home (to the day centre), ask to see A. He was stabbed in the leg by a coast guard to prevent him from getting into the truck. There are many beatings in Patras. Since they don’t want us to stay here, why don’t they let us go?” The discussion was interrupted by a man bringing news from the port. M. greeted me, telling me that he probably won’t see me next time I’m there. He would be trying again to leave that night, for the sixth time. He wished me “Have a good trip” and I did the same.

We returned to the day centre. There I got to meet A. There was no interpreter present, so I couldn’t get his full story, but he explained it to me by showing me his injured leg and making a stabbing movement with his hand, combined with the word “police”. I looked around. The walls were covered with messages and paintings. My attention was drawn to some maps on which they have noted their journey. The places they came from and the ones they want to go to.

The social worker told me about the personnel’s daily work. About their quixotic fight against the windmills. Sometimes a child communicates to tell them that he has reached his destination. Other times they completely lose track of them. Once they received a phone call from Italy: an unidentified teenager had been found dead in a truck, and the only clue they found on him was a card of the day centre.

On the afternoon of the same day, I attended a meeting of local anti-racism organisations. The issue was how to deal with and publicise racist behaviour by the Patras police and coast guard. Incidents of violence against immigrants were at the time a daily occurrence.

I gathered my things and my thoughts and set off for the return journey. We agreed with the colleagues from the day centre that I will return to do interviews for the program and they were committed to providing me with a safe space to conduct them.

One week before the scheduled interviews, the police suddenly evacuated the camps in the factories. About 450 people were arrested and taken away from the city. The rest escaped and hid. The colleagues from Patras informed me that we couldn’t proceed with the interviews. The children who were at the centre were now few and too scared to talk. I felt very disappointed. Because I wanted to wait until I had created the best possible conditions for the interviews to take place, I missed the opportunity to hear the children’s stories. I thought of M. While planning my return I had mixed feelings about him. On the one hand, I wanted to see him and to talk to him again. On the other hand, I wanted him to have managed to escape. At that moment I wanted to believe that he did it. That he managed to pass to Italy and met again with his brother in Germany. That a safe life awaited him. A place to grow, to live, to create. Isn’t that what everyone wants?

A few months after my visit, the day centre itself stopped working. It took several months of uncertainty until another organization took over. When they handed over the keys in January 2019, they had under their protection 691 unaccompanied children. 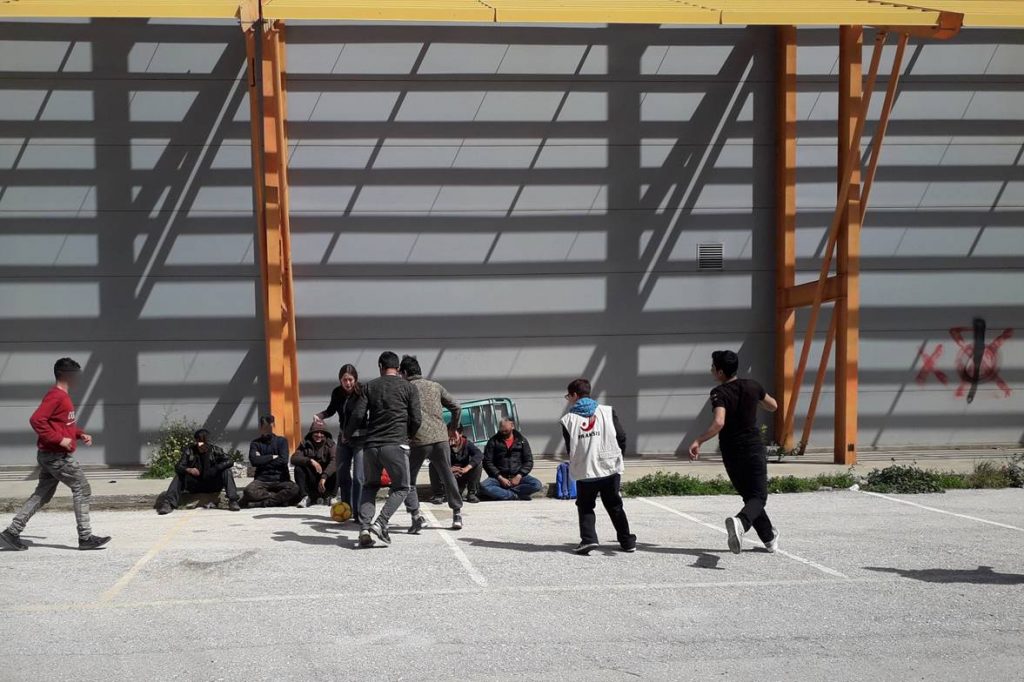 Marina Rota is a Sociologist with postgraduate studies in Criminology in Greece and Belgium. She holds a PhD in Sociology from Athens’ Panteion University of Social and Political Sciences and completed graduate seminars in Social Street Work. Marina is responsible for the Greek aspect of the project.
Manage Cookie Consent
To provide the best experiences, we use technologies like cookies to store and/or access device information. Consenting to these technologies will allow us to process data such as browsing behavior or unique IDs on this site. Not consenting or withdrawing consent, may adversely affect certain features and functions.
Manage options Manage services Manage vendors Read more about these purposes
View preferences
{title} {title} {title}