I vaguely remember that day. I was on my way back to Belgium from Italy after completing a round of follow up interviews and follow up with my study participants. I had a stopover en route to Brussels and as soon as I got on my connecting flight, I found my seat and prepared for a nap because I had taken a very early flight out of another Italian city. A woman arrived and sat in the seat next to me, but she didn’t know how to tighten her seatbelt, so I helped her, she thanked me, and I closed my eyes again ready for that nap. “Good afternoon sister, where are you going?” It was the woman next to me asking that question, I could tell that she was also Nigerian from her accent. I replied, asked where she was going, and she told me. She began to talk and mentioned that she worked for a madam, meaning a female trafficker in the Nigerian human trafficking networks and was terrified because she would not be back in her city on time.

She explained that after much pleading, her madam surprisingly allowed her to leave for the weekend to visit a family member in another part of Italy. A friend of hers, [1]Anna booked the flight for her but had chosen an afternoon arrival instead of a morning one, but she needed to be back at work on Monday morning. Although our flight would arrive in Rome at 8 am, she had a 6-hour layover between flights, meaning that she would not arrive in her city before 4-5 pm. She was terrified and kept saying “eh, what will I do? My madam will kill me, my madam will kill me, you know how they are now, you understand, she will kill me. Anna will be the one to suffer too because she is the one that helped me with the ticket, oh god, madam will deal with her because of me, and she (Anna) is not well”.

I am rarely at a loss for words, but at that moment, I was, and I had so many thoughts going through my mind. From what she had shared with me, I knew that she had a madam who rarely allowed her to visit her family, she was terrified of this madam who would probably use a form of physical violence as punishment; hence the phrase ‘my madam will kill me’ and she assumed that I also worked in prostitution and had a madam too so I would understand her predicament. She kept saying ‘you know it is, you know how they are’, ‘you understand, my sister’. She eventually calmed down after I reminded her that there was nothing we could do at that moment as we were airborne and would be that way for the next two hours. So, she rested her head and shortly after, I could hear her snoring.

I, on the other hand, was wide awake. I had so many thoughts going through my head! I wondered if I should ask her for more information! Was she a victim of trafficking? From our conversation, I deduced that she was, but did she know that she was, and would she be willing to leave? Did she want my help? What help could I offer her there and then? Should I text my contacts in some Italian NGOs? Should I alert the police? Would that be betraying her confidence? Would she be mad at me? What would I say if I called the police, after all, she was an adult and not an unaccompanied minor or underage? If she ran away, what would happen to sick Anna? She had mentioned that Anna wasn’t well and would bear the brunt of her madam’s anger when she showed up late. Would she be punished and accused of colluding with her? I wrestled with these thoughts until we landed. Once we landed, she asked if I knew of any other way to help her get home faster and I suggested that she head straight to the airline counter to ask if there was an earlier flight that she could switch to that would hopefully allow her to get home early enough. She thanked me profusely and ran off to do so.

That experience left me very unsettled and even now when I think of it, I am unsettled. Should I have done more? What was my role at that moment? She assumed that I was her peer in the sex trade industry and that allowed her to share her fears with me. I let her believe that assumption because correcting it in the moment may have caused her to completely close off or panic because she had shared certain information with me. Should I have said something right away? Should I have asked for more information, or asked if she needed any help and if there was any way I could support her? Should I have contacted a friend on the ground? I don’t know. I know a lot of things that I could have done but I don’t know what I should have done at that moment as a researcher.

This event is one that I had kept out of my mind and had I not seen it in my e-journal, I would have kept it that way for much longer. As researchers, we often find ourselves in situations outside of the expected or the anticipated and may have to make decisions in the moment. Those decisions do not always leave us feeling happy and satisfied or even with a sense of closure, with that feeling you get after doing the best that you can. It is important, however, to go back to those decisions and reflect on them, see what we can learn from them and help others prepare. Grappling with ethics is fundamental in research and one of the things that I have been confronted with over the past few years is that ethics is much more complicated than I realized. Things are not always black and white, there are grey areas, blackish-grey ones, grey-ish white ones and so many others in between. 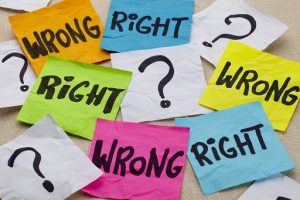 How I am able to navigate these areas is by doing a lot of personal reflecting, processing a lot with our team and my study buddies and by remembering something a therapist once told me- “in your line of work, you’re confronted with people’s needs, pain and suffering and you are constantly faced with ethical dilemmas and challenges. Make the ethical decision that you are able to live with. The one that allows you to look in the mirror and not be ashamed of the person you have become (paraphrase).

[1] The name has been changed for anonymity

Sarah is currently a PhD candidate at Ghent University where she is part of the ERC funded ChildMove project and is conducting research on the impact of transit experiences on the wellbeing of unaccompanied minors. Her part of the project focuses on Nigerian females that arrived in Italy irregularly and were trafficked for sexual exploitation